FILL IN THIS FORM NOW FOR A FAST CALL BACK

24/7 availability and expertise in all insect species 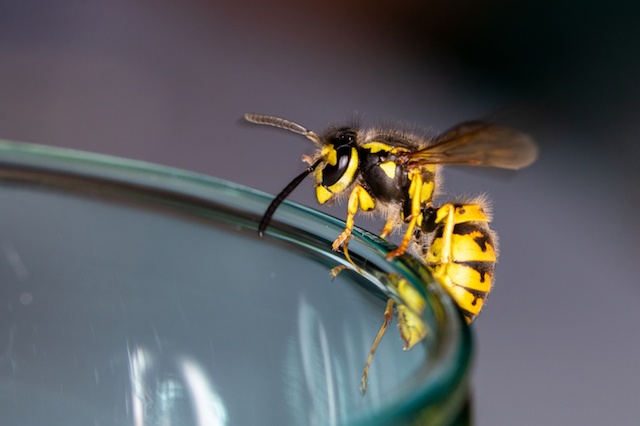 Wasps can be the bane of existence for many homeowners. These pests are most prevalent during Summer. It seems that as soon as it gets warmer, these insects emerge and begin to make your life a misery. Wasps have been known to ruin countless summer barbecues and outdoor dinners. In fact, you can probably recall times when you cowered in terror as a wasp buzzed around your head. Wasps can also be a problem for people who enjoy gardening. There’s nothing worse than working in your garden and dealing with wasps who think they own the place.

But what can you do about wasps? The unfortunate fact is that in most cases you’ll need professional help. Believe it or not these insects can be incredibly dangerous. Wasps are highly territorial and also extremely aggressive. What this means that you should never attempt to remove their nests by yourself.

Wasps are a potentially dangerous nuisance

Many people think it’s as simple as knocking the nest down. Others attempt to burn the nest or throw water on it. But doing this is an extremely bad idea. This is not a recommended form of insect management in this instance as it will only make the wasps angry. They will perceive it as an attack and in turn will attack you.

What this means is that the wasps will begin to swarm and this may result in painful stings. What you also need to know about wasps is that they are not like bees. While bees die after stinging, wasps are able to sting multiple times. The fact is that you could be stung dozens of times and this may have serious consequences. As well as being painful, many people are allergic to wasps. The problem is that you won’t know this until you’ve been stung and end up at the hospital. For this reason you should never try to deal with wasps yourself.

Wasps can also be a problem for certain businesses. This is especially true if you have an outdoor eating area or beer garden. During summer, when these areas are most often used, wasps are attracted by sugary foods and drinks. They will construct a nest nearby and at that point begin to harass your customers. This will often result in complaints from angry patrons, which is something we’re sure you’d rather avoid. Wasps can become a big problem during the height of summer. In this type of situation, you may have to deal with complaints on a daily basis.

Something else you need to understand about wasps is that removing the nest often isn’t enough. Once wasps find a place to build their nests they tend to return to that area. This could be because the area is sheltered or something about it appeals to them. What this essentially means is that the wasps will return to the same spot the following summer.

If you’re suffering from wasps in either your home or business then we can help. Getting professional pest control in Surrey is vital. Our firm has the necessary protective gear needed to remove a wasps nests. We also have access to methods which prevent the wasps from ever returning. With our help you can eliminate these pests for good, and enjoy peace and quiet again. Remember, while you may be tempted to remove wasps using DIY methods, this really isn’t advised. Wasps can become highly aggressive when disturbed. Save yourself the time, hassle, and pain of wasp removal. Call us today and let the experts handle this problem.

For Pest control in Hertfordshire

For Pest control in Essex

For Pest control in Cambridge

For Pest Control in Kent

This website uses cookies to improve your experience while you navigate through the website. Out of these cookies, the cookies that are categorized as necessary are stored on your browser as they are essential for the working of basic functionalities of the website. We also use third-party cookies that help us analyze and understand how you use this website. These cookies will be stored in your browser only with your consent. You also have the option to opt-out of these cookies. But opting out of some of these cookies may have an effect on your browsing experience.
Necessary Always Enabled
Necessary cookies are absolutely essential for the website to function properly. This category only includes cookies that ensures basic functionalities and security features of the website. These cookies do not store any personal information.
Non-necessary
Any cookies that may not be particularly necessary for the website to function and is used specifically to collect user personal data via analytics, ads, other embedded contents are termed as non-necessary cookies. It is mandatory to procure user consent prior to running these cookies on your website.
SAVE & ACCEPT